Here is the Apple iPhone lineup for 2022! Apple once again has four new models, just like in previous years. The lineup is therefore the following: iPhone 14, iPhone 14 Pro, iPhone 14 Pro Max, and the brand-new iPhone 14 Plus. Apple’s plan for the iPhone 14 Plus is straightforward: release a large-screen iPhone at a reasonable price to give those who have always wanted a larger iPhone but couldn’t afford the Pro Max model.

However, this release also comes with the demise of Apple’s “mini” form-factor iPhone from the iPhone 14 lineup. In part, this change in strategy comes as a consequence of the poor iPhone 13 mini sales—primarily in the US. (According to CIRP, the iPhone 13 mini accounted for only 3% of total iPhone sales in the previous quarter.) At large, this move makes more sense in the future, as the mini form factor has always had a niche audience, and the plus-size iPhones have generally proven to appeal more to a broader audience.

What are the similarities between the Apple iPhone 14 Plus and the iPhone 14?

The iPhone 14 Plus, Apple’s most recent iPhone model, has a lot going on in general and is largely identical to the iPhone 14 in terms of specifications. which both have a great deal in common with the iPhone 13 series.

The iPhone 14 and iPhone 14 Plus share the same design, an aluminum chassis, and a glass back that are remnants of the iPhone 12 series. It has the same old design that you’ve seen on the iPhone 13. Both models have a Super Retina XDR display up front. Additionally, the display supports HDR and True Tone, and it has a Ceramic Shield on top for improved protection against drops and general scratches. Both iPhone 14 models start out with a 128GB base storage option and are powered by the same A15 Bionic SoC as the iPhone 13 lineup. There are also 256GB and 512GB options for those needing more storage.

Apple claims the addition of a new core will enhance the graphics performance on both the iPhone 14 models. Therefore, it is anticipated that graphically demanding activities like video editing and gaming will run more smoothly on the iPhone 14 and iPhone 14 Plus than on their predecessors. The SoC’s other features are identical to those of the iPhone 13 series.

The iPhone 14 Plus gets the same 12MP dual-camera setup at the back as the regular iPhone 14, handed down from the iPhone 13 series. The main sensor is bigger this time around, with an f/1.5 aperture as opposed to the f/1.6 aperture on the predecessor. In addition to promising to improve photos and videos in low-light situations, Apple claims that by letting more light enter the lens, it will also allow for reduced noise in low-light photography. Speaking of low-light performance, the upgraded True Tone flash is another element that helps both iPhone 14 models take better nighttime photos. The iPhone 14 and iPhone 14 Plus have flashes that are 10% brighter. It offers better uniformity, provides more consistent lighting in low-light scenarios, and helps maintain natural skin tones.

The iPhone 14 and iPhone 14 Plus have improved cameras throughout the entire camera system, not just the rear sensors. According to Apple, the iPhone 14 Plus comes with a TrueDepth front-facing camera that is noticeably wider (f/1.9 aperture) than that of its predecessor. Apple says this should result in sharper and brighter images, even in low-lighting scenarios.

The new Action Mode on the iPhone 14 Plus is also said to make shooting videos a unique experience. As its name implies, it reduces shakes, vibrations, and motion while recording to produce smooth-looking videos. Therefore, if you shoot a lot of moving subjects, this may help you film them more effectively.

Another big change in the iPhone 14 Plus (and all other iPhone 14 models) is the omission of the SIM card tray. Apple is ditching the physical SIM card in favor of two eSIMs on all iPhone 14 models in the US. While most people should agree with this change, as eSIMs have become more affordable in recent times, it can be inconvenient for those with an operator that doesn’t yet offer eSIM or for those who frequently switch from Android to iPhone.

The iPhone 14 and iPhone 14 Plus receive a few extra features, such as Crash Detection and Emergency SOS via Satellite. These functions, which are present in all iPhone 14 models, are said to provide emergency assistance when you need it. 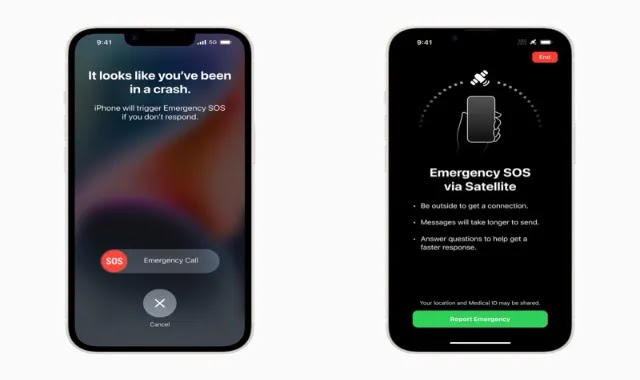 Your iPhone’s Crash Detection feature allows it to identify serious auto accidents as they happen and automatically contact emergency services so they can respond quickly. The feature accomplishes this by utilizing built-in iPhone features like the barometer to measure cabin pressure, the GPS to determine your location, and the microphone to identify severe auto accidents through the noise.

However, if you’re in an area without cellular or Wi-Fi coverage, you can use the Emergency SOS feature to send messages to emergency services using satellites. Later this year, it’s expected to launch in the US and Canada, offering two years of free coverage.

What Is the Difference Between the Apple iPhone 14 and the iPhone 14 Plus?

The iPhone 14 Plus has some slight differences in some of its specifications despite having many similarities to the iPhone 13 series and the regular iPhone 14.

The most important difference is that the iPhone 14 Plus’s screen measures 6.7 inches instead of the regular iPhone 14’s 6.1 inches. The iPhone 14 Plus’s larger display allows it to fit more content on the screen, improving the experience of activities like gaming, texting, and watching videos. The two models were constructed using different materials, which contributed to their different weights. The iPhone 14 and iPhone 14 Plus use lighter, aerospace-grade aluminum as opposed to the iPhone 14 Pro Max, which is constructed from surgical-grade stainless steel to provide a premium finish and better durability. So they weigh less. It will be interesting to see how this weight disparity plays out in practical applications.

The battery performance, which is said to have been enhanced across the entire iPhone 14 lineup, is another area where the iPhone 14 Plus differs from the regular iPhone 14 in comparison. In fact, Apple claims that the iPhone 14 Plus in particular has the “best battery life in an iPhone.” Although the exact battery capacity is unknown, Apple has provided some data to back up its claim.

Is the iPhone 14 Plus worth it? In 2014, Apple released the first iPhone to bear the “Plus” moniker. The iPhone 6 Plus was designed for people who wanted a larger screen than the iPhone 6 and a longer battery life.

Apple reintroduced the Plus moniker eight years later. And it’s aimed largely at the same group of people this time as well. In general, the $100 more expensive iPhone 14 Plus has many of the same features as the regular iPhone 14. But for that extra $100, you get a device with a larger display—equivalent to the iPhone 14 Pro Max—and longer battery life.

The iPhone 14 Plus is the best option for you if you want to purchase the most recent iPhone—one that you can use to game or watch content without worrying about the battery life—and you don’t mind spending an additional $100.

The iPhone 14 Pro, on the other hand, is the best iPhone currently available for those who don’t mind spending an additional $200 and want the newest SoC but don’t mind a smaller iPhone. Both of these models feature a pill-shaped notch (Dynamic Island), a 120Hz ProMotion display, an always-on display, and a 48MP triple-camera setup.

Because Apple has now stopped selling the iPhone 13 Pro and iPhone 13 Pro, you will soon find them on sale for a lower price. You can purchase an iPhone 13 Pro model for roughly the same price if you’re upgrading from an older iPhone and don’t mind giving up a few features (Crash Detection, Emergency SOS via Satellite, and a few minor camera and performance updates), which gives you an advantage over the iPhone 14 and the iPhone 14 Plus in terms of build quality, triple cameras, ProMotion technology, and a few other features.

How to Create a Wi-Fi Hotspot on an Android Device